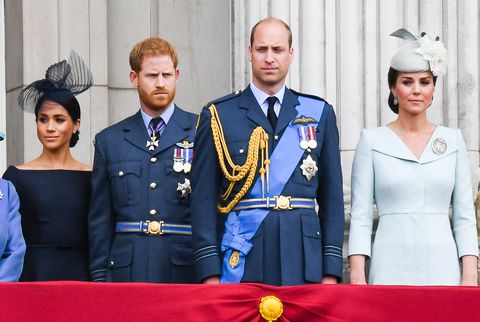 Meghan Markle, Kate Middleton, Prince William, and Prince Harry may do events together for the sake of the Queen, but privately, the Fab Four aren’t as close as people may want them to be. People reports that this is partly because the two couples have different roles in the monarchy and partly because Meghan and Harry feel isolated from the family.

With Remembrance Day, the four’s last joint event, “Everyone was doing their duties, doing what they needed to do on behalf of the family—and that was that,” a source said. “But there is a divide between the four of them. It’s hard for people to digest, because everyone wants them to be such a unit.”

A separate source added that Meghan, Kate, William, and Harry need to learn to get along as their paths continue to diverge.

William is a future king and will have different responsibilities than his brother longterm, and Harry and Meghan are said to be struggling with “ongoing feelings of isolation from the rest of the family” as they cope with the UK tabloids’ constant attacks on them and Meghan particularly. Neither Kate nor William have spoken out publicly to defend them.

“They’re going to have to try to figure out how to be civil, but they are on different paths now,” a source told People. “It’s just the reality of the situation.”

Harry and Meghan are believed to be on a six-week break now and will not be attending Christmas with the royal family at Sandringham. In the statement their spokesperson released, they noted that other royal family members have taken Christmases off too (Kate and William have), and that their decision “has the support of Her Majesty The Queen.”

They needed this time away after all they’ve gone through, a friend told the outlet.

“Just on a human level, if you take everything else out of the equation, I don’t think they’re in very good shape to deal with anything right now,” the friend said. “Everyone is hoping that they will come back from this break stronger than ever, and maybe with some time out of the spotlight, they can figure out what path to take next.”