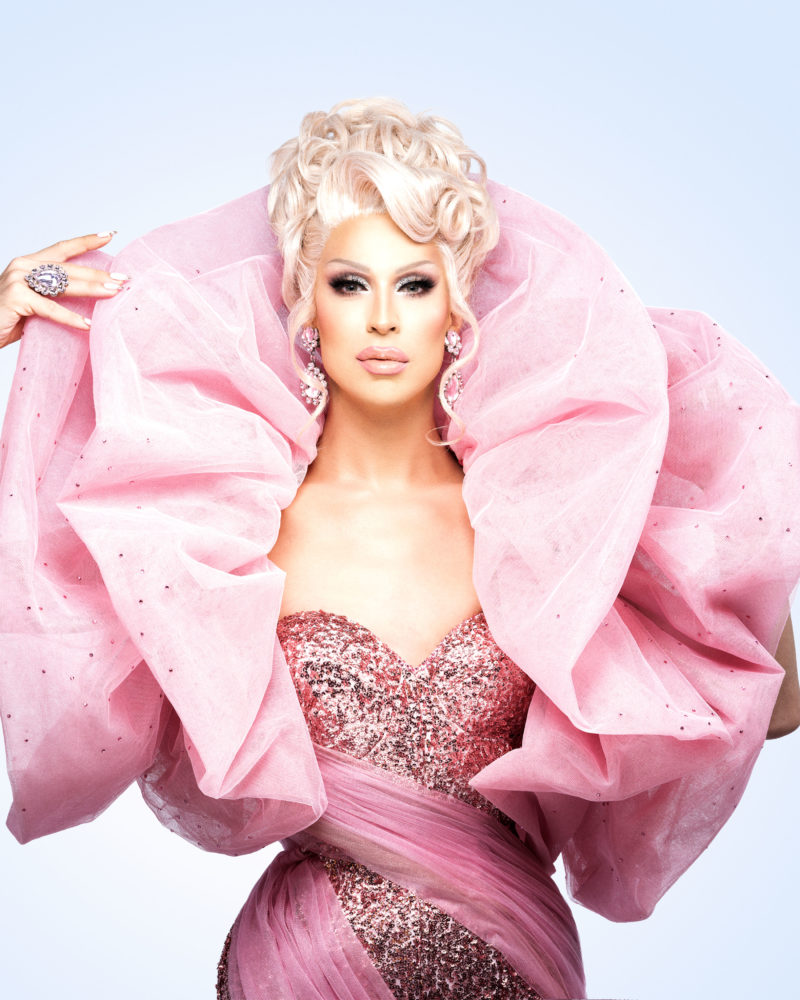 The Queen of the North spills the tea about the new season, the new judges and what LGBTQ2S+ History Month means to her.

Brooke Lynn Hytes is very Canadian — almost to a fault.

As the host and judge on Canada’s Drag Race season two  — which premieres October 14 on Crave — being judgemental is quite literally her job. While many in and out of drag already read people for free (see: all of social media), being paid to critique contestants seems like a dream job. And don’t get her wrong, it is Brooke Lynn’s dream job, but sometimes her “Canadian-ness” gets in the way.

“We’re not naturally judgemental people,” she says over the phone. “Well, we actually are, but we have this politeness in us that thinks, ‘How do I say this nicely?’”

The runner-up on season 11 of RuPaul’s Drag Race, the “Queen of the North,” is in the unique position where she understands both sides of the Main Stage. As she quickly became a front-runner for her fashion (hello, glittery Mountie uniforms!) and runway walk (thank you, National Ballet School of Canada), the L.A.-based, Toronto-born queen was never one to shy away from her Great White North roots. So when the Canadian edition of the series was announced in 2019, fans knew only one performer could sash-eh (get it?) into the spotlight.

“I can say being a contestant and a judge are both very stressful,” Brooke Lynn says of her Drag Race history. “I know how much these queens want it and how much they put into it.  It’s hard because drag is such a deeply personal art form, so having to critique that can be difficult. I think I find it more emotionally challenging to be a judge.”

We kiki’d with the Canadian queen to untuck a few Canada’s Drag Race season two secrets and get her thoughts on LGBTQ2S+ History Month.

What have you learned from the first season that you are applying to Canada’s Drag Race season two?

I think the biggest lesson that I learned was how to give good critiques in small sentences. Michelle Visage has really mastered it because she’s been doing this for so long. I have a tendency to ramble and go on these tangents about things, but you have to stop yourself and be like, “No one’s going to hear any of that because this is an hour-long TV show, and they have to edit all of it down.” So, learning to say what I needed to say in smaller sentences, I think, was my biggest takeaway.

There are a lot of new faces on the judging panel. How do you think this group differs from last season?

Our judges were so great in season one, and I think this season has more of the same — we have a really well-rounded group of people! This year we have Brad Goreski, a bonafide fashion expert, and he used to be a drag queen himself, way back in the day. Then there’s Amanda Brugel, an incredible actor on Handmaid’s Tale, Kim’s Convenience and many other things. And we have the wonderful Traci Melchor, who has 20 years of broadcast experience under her belt. And then we have an actual drag queen — me! I think we really have all of the bases covered, and everyone comes together really well. I can’t say enough how much fun we had!

From a viewer’s perspective, the vibe of Drag Race is delightful chaos. Is that the way it feels on set?

Chaos is the perfect word [laughs]. Like it’s obviously chaos, but it’s beautiful, and it’s wonderful too. I always say we’re making a TV show, and the whole point of a TV show is to entertain people. And I think that’s what we did — we put out a very entertaining season, and I can’t help but be proud of that.

What do you think would surprise viewers to learn about the show?

It takes a really long time to film. I have to be in drag for about 14 hours a day. I think people think you show up; everything’s ready, bam, bam, done. But no, it’s not: I wish it were that simple. I am not a patient person, so it was a real test for me.

From the previews, it looks like an amazing group of queens. Can you tease anything about what we can expect from Canada’s Drag Race season two?

You can expect some legendary iconic looks, for sure!

Through Drag Race, Canada is finally getting the drag recognition it deserves. How do you think the Canadian drag scene has evolved over the years?

It’s changed so much, and I think that’s really due to RuPaul’s Drag Race. Before that, there wasn’t much to do for queens. You could have your shows at the bars and maybe get a corporate gig here or there, but there was nothing to do in terms of taking your career to the next level. Then suddenly, there was this platform, and it pushed drag queens and inspired them to work harder and be more creative. And I think that’s exactly what happened in Canada. We had season one, and then for season two, we’re seeing all of these blossoming, fabulous queens coming out of the woodwork and being inspired to get on the show.

How does it feel to be premiering during LGBTQ2S+ History Month?

I think it’s amazing! I love that we’re premiering during this time, and I think it provides an opportunity for people (and me) to learn more about our history — there’s just so much that we don’t know.

How will you be celebrating?

I am going to read a book [laughs].

Congrats on your other hosting gig for 1 Queen 5 Queers. What can you tell us about the new show?

We’ve had so much fun making it! It’s basically a revamp of [the 2009 show] 1 Girl 5 Gays, and I just wanted to make something more inclusive and that had more representation where it wasn’t just gay men. So trans people, non-binary, two-spirited, masc, femme, you name it. We tried to get as much diversity in there as possible.

Virgil Abloh’s Fashion Legacy in Pictures
Everything You Need To Know About Tubing Mascaras
Priyanka Chopra and Nick Jonas Dressed to Stand Out at British Fashion Awards Date Night
What to Gift the Guy in Your Life Who Loves to Run
Inside Jennifer Lopez and Ben Affleck’s First Thanksgiving Back Together: ‘They Are Stronger than Ever’
Follow us on Facebook
Follow us on Twitter
Follow us on Pinterest
Follow us on Instagram