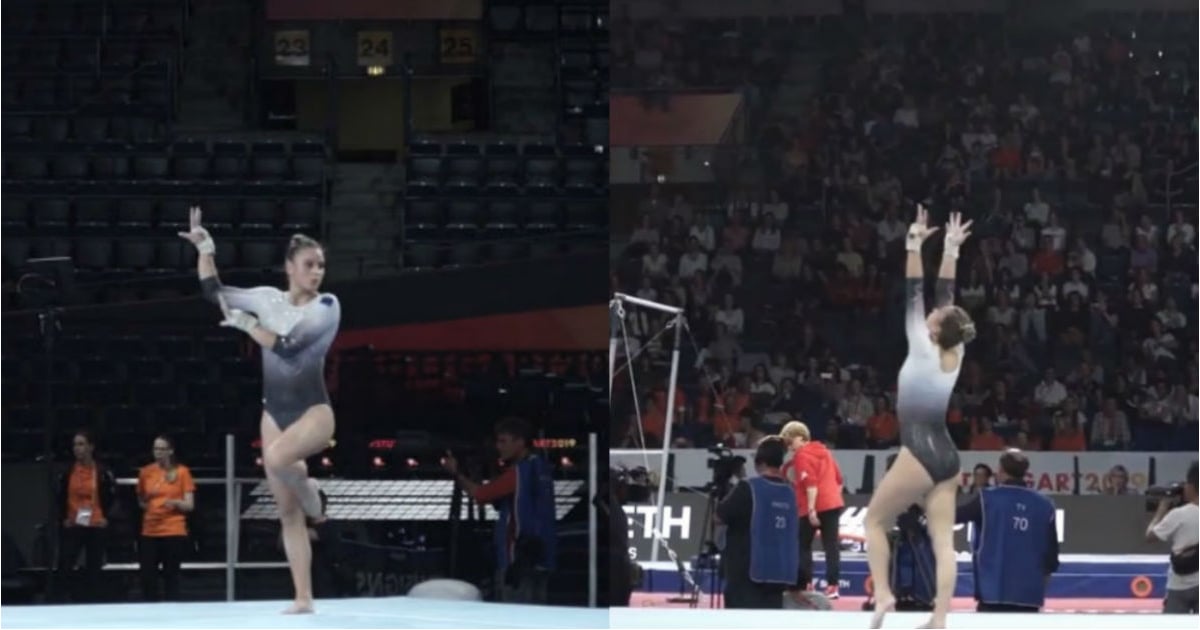 When it comes to floor routines, you’re more likely to see ones set to popular songs on the collegiate level (think Katelyn Ohashi) rather than on the elite level (Simone Biles) — minus the lyrics, of course. Take, for instance, Maggie Nichols’s 2017 routine for Oklahoma featuring The Chainsmokers and Alicia Boren’s 2019 performance for the Florida Gators with some Fifth Harmony and MC Hammer.

It’s not every day that you come across a routine from an elite gymnast featuring music you’ve sung in the shower. But 17-year-old Maia Fishwick, who represented New Zealand at the 2019 World Gymnastics Championships this month, where the US women and Simone dominated, has a floor routine set to Billie Eilish’s “Bury a Friend.”

The song, with its thumping beat and theatrical sound effects, really does have choreography potential, so we’re glad Maia took advantage and brought it onto the world stage. She opens with a double backflip (“double back” for short), and a lot of her dance elements are timed perfectly with the screeches and quirky clamors that make “Bury a Friend” so unique and wonderfully eerie to listen to.

Amanda Johanson, a former elite gymnast who competed collegiately for the University of Denver and has a history with hip-hop and contemporary dance, choreographed Maia’s routine. In fact, Amanda said she does “most of the choreography for the senior internationals in New Zealand,” and she’s been living there for five years now. She told POPSUGAR that she has a reputation for making one-of-a-kind routines that are enjoyable for both the gymnasts performing them and the crowd. “The music always influences the movement, and that’s my favorite part about choreography,” she said, explaining that Maia was the one to choose “Bury a Friend” as her floor music in the first place. “It’s important that the athlete picks music they have a connection to,” Amanda added.

Ahead, you’ll find footage of Maia’s routine from 2019 Worlds podium training, which led up to the qualifying rounds of the competition (deciding the gymnasts and countries that would compete in the event, all-around, and team finals), as well as a video from earlier this year. When gymnastics meets Billie Eilish, you know it’ll be something good.