The stuffy, outdated rules of menswear – those dictating what you can wear and when and with what – are fast eroding. Where our fathers’ wardrobes were governed by dress codes explicit and implied, now anarchy rules. It’s well-dressed anarchy, but anarchy nonetheless.

Formal threads now nestle against streetwear, trainers sprout in offices, and whether or not a piece is considered appropriate is now as malleable as what it sits alongside.

So, in the spirit of rebellion (or to use the technical term: high-low dressing), here are six creative ways to style out the rest of the season, by combining formal and casual styles.

A true high-low menswear staple should be versatile enough to take its wearer from Friday morning to Saturday night. A prime example of a piece that fits the bill effortlessly, the overcoat cuts just as fine a figure over a suit as it does when used to pep up athletic apparel.

“Team it with a grey or black hoodie, smart trousers and a trusty pair of pure white sneakers,” suggests Paul Higgins, a stylist who has worked with Aquascutum, Reiss and Diesel.

To hit the high-low sweet spot, opt for a slim-fit, single-breasted coat, which is ideal for dressing all the way down with jeans but still smart enough to top a formal look. Once an unthinkable combination, now a menswear mainstay; in recent years sporty footwear has made it off the track to establish itself as the perfect running mate to tailoring.

However, wearing suits with trainer is not as simple as heading to work in your gym shoes. “The key is to spend a little more on the footwear,” says Higgins, pointing to the line-up of sneakers from heritage brands like Grenson and John Lobb.

As well as looking for sneakers that are built as well as your brogues (or are at least minimal enough to appear so), ensure the whole outfit meets in the middle by relaxing your tailoring with slimmer fits and swapping out a shirt and tie for a sweatshirt or roll neck. The roll neck’s return to glory a few years back was as unexpected as the resurrection of cargo trousers, bum bags and just about everything from the seventies. But it’s hard to imagine life without it now.

Make no bones about it, this multi-tasking neck-coverer is an inherently dressed-up piece, particularly in a fine-gauge weight and when cut from premium materials such as merino wool, making it the ideal candidate for dressing up a pair of jeans.

“It’s a somewhat tricky look and isn’t for everybody,” says Higgins, who stresses the importance of making sure that the cut of your denim is either slim or straight to swerve any dad-dressing, Steve Jobs vibes. There’s merit in the thinking that no man looks bad in a good overcoat, which (aside from its insulating abilities) is what makes it such an essential part of any wardrobe.

Despite being invented for layering over a suit (hence the name over-coat), its appeal hasn’t wavered as dress codes have relaxed. So readdress the casual lean of jeans by using one to add ballast to an Oxford shirt or knitwear, before footing the look with a pair of smart Chelsea boots.

A coat that’s fitted, but not figure-hugging, echoes the ease of your lower half. “It seems smart from a distance, but will have your counterparts wishing they put on the comfies themselves,” says Higgins. When an overcoat leaves you sweating, but a suit jacket is too flimsy, enlist outerwear designed to straddle environments – chiefly anything that got its start in the military.

The M-65 field jacket, for example, is a lightweight, waterproof variation of the classic fishtail parka designed for troops suffering Vietnam’s oscillating weather patterns, while the woollen duffle was favoured by the British Royal Navy during World War II.

Military heritage means the coat works with your office uniform. “Team with a suit, double-monks and a document case, to be protected from the elements in style,” says Higgins. Just stick to rank with browns, greens and navies to ensure the styles are in step. As tailoring relaxes from Mad Men straitjackets, a blazer and joggers makes for a solid separates combination that proves comfort isn’t mutually exclusive from style.

“It sounds bizarre on paper,” says Higgins, “but styled right – with minimal accessories and the correct footwear – this comfy look is a winner.”

It’s a match that lives or dies on fit; slim below, tapering to a cuffed ankle, but roomier and unstructured up top. Avoid splitting yourself fully in half by dressing down the blazer further with a lightweight knit or sporty track top. 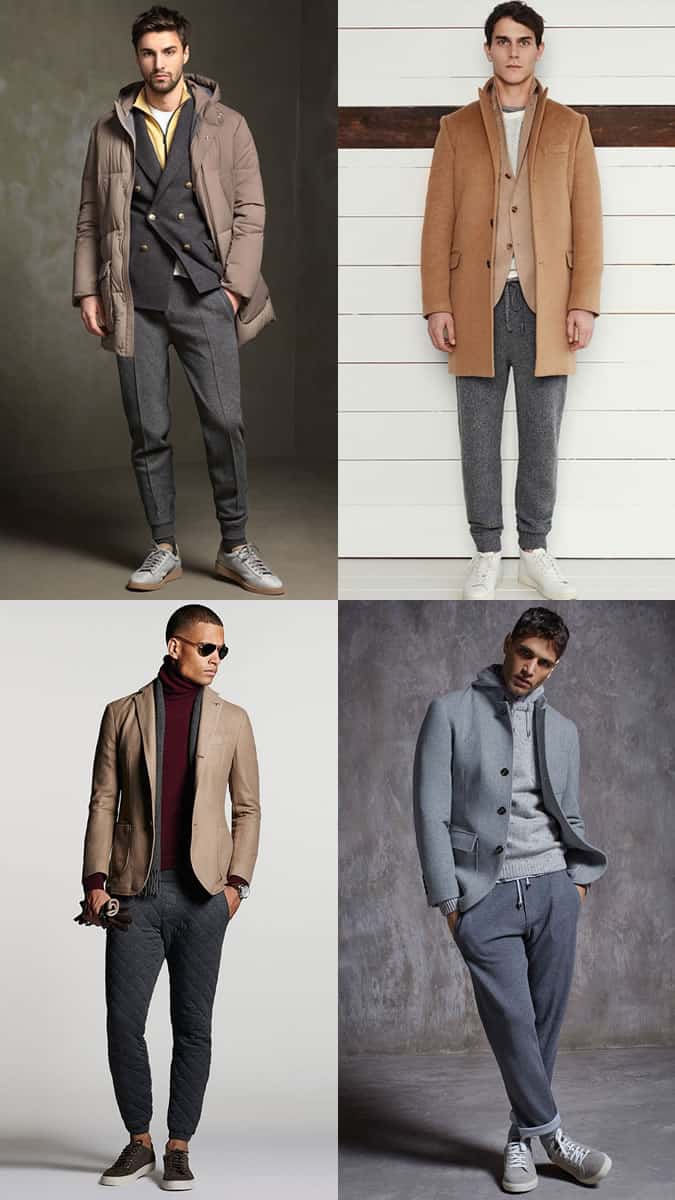 Could Alessandro Michele Go to Chanel? This Gucci Collector Thinks So
How To Tie A Bow Tie: Simple Steps And Instructions 2022
The lululemon Black Friday Specials You Need to See to Believe
Meghan Markle’s Favorite DeMellier Handbag Is on Sale for Black Friday
The Kardashians Went All Out On Thanksgiving With Royal Portraits Of Themselves